From Dancing with Diana

When Gillian announced that Diana was coming to Westerford I didn’t believe it.

“No, she really is, Alex. Look at this!” She waved the newspaper in front of me. We were having breakfast before she went off to school. My parents had already left for work. I looked at the front page that Gillian thrust at me. “Princess To Visit
North Devon.” Three years after the wedding she was still big news. She was pregnant again, expecting in September. The article said that she’d be in Westerford for a morning and would do a walkabout along the Strand before opening a new radiology unit at the hospital. Just her, not Charles. It was clear by then that the crowds were much more interested in her than him and she often made official visits by herself. My heart squeezed and my breath felt short. Diana was still my secret treasure. I couldn’t not go and see her if she was nearby. But to be one of hundreds of pathetically besotted punters ogling her from the side of the road—and me more pathetic than all of them—that also seemed impossible.

“Let’s go!” said Gillian. It was so simple for her.

I hesitated. She misunderstood my reluctance. “Please, Alex! Please come with me! I don’t want go by myself.” Gillian was completely skeptical about the monarchy but Diana was another matter altogether. “I need moral support!”

“OK,” I said. “I’ll go with you.” I didn’t tell her that I’d need moral support a lot more than she would. Gillian would provide it without even trying.

The visit was two weeks away. The small part of my being that was always focused on Diana threatened to erupt out of control.

It would be the first time since Nails that I was in the same physical space as her—that I would see her, hear her, breath the same air as her. The question that burnt into me like a torturer’s wire was, would she see me? Would she pause in front of me, just by chance? And if her gaze fell on me, what would she see? A skinny, feeble person in a wheelchair? Would my face seem familiar? Would she remember being fifteen years old and dancing with a crippled boy at his school? 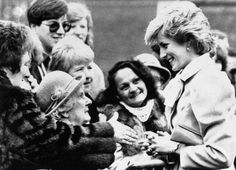 I knew she would not. But I could not stop myself from imagining what could happen, what was technically not beyond the realm of possibility: Diana pauses in front of me and Gillian, accepts Gillian’s flowers with a smile, then looks at me, looks again, says—“Oh—I think we’ve met” and I say, “Yes, your Highness, years ago you visited my school, and we danced together” and the words would come out clearly so she could understand, and she would reach out her gloved hand for me to shake, and the cameras would flash, and she would say, “Yes, of course, I remember! Please tell me your name again,” and I would tell her, and she would say “Alex, it’s lovely to see you again. Do take good care of yourself,” and I would smile and let her go, aloft with joy.

“Give it up,” I said to myself in disgust when this moronic fantasy refused to die a decent death. But I couldn’t give it up. I resigned myself to living in dreamland until the day came and went and I could awaken.

“You’re what?” said my mother when Gillian and I appeared in the kitchen on the morning of the walkabout. “Dear oh dear. Well, off you go, my poor little royalists. Give my regards to HRH.”

It was a nice enough early summer day, cool but sunny with fast-moving clouds blowing in from the Irish Sea. The tide was full. We set off over the bridge early so that we’d be ensconced in a good spot before the crowds came. Forcing a wheelchair through a crush of ardent loyal subjects would not be fun. We found a place right in front of the Albert clock where no one would block our view of Diana. Or hers of me. We waited. The excited chatter around us made it hard to talk, which was a relief. My heart thumped erratically like a confused mallet in my chest. I was wearing sunglasses, which helped. I’d worn a nice shirt and trousers, too, camouflaged by my ordinary jacket to deflect more teasing, though if I’d had a nicer jacket I would have worn it.

From further up the Strand the noise of the crowd swelled. “She’s here! She’s here!” people around us began to shout. Her entourage came into view: a row of solemn-looking policemen, their suspicious gazes swiveling from side to side. Then a cluster of important people from the mayor’s office. I recognized a couple of them, large ladies done up in their Sunday best. Well, I couldn’t blame them. They’d talk about this day for the rest of their lives.

And then there she was. Walking along beside the mayor and his wife. Wearing a pink outfit and carrying pink and yellow flowers. She looked tall and slender, barely pregnant. No hat. Her hair longer and blonder than I remembered it. She seemed so familiar, from all the thousands of photos and television appearances I’d seen. She walked slowly, approaching one side of the street and then the other, reaching out to touch the outstretched hands, to take up a posy of flowers and sniff it appreciatively, then hand it to one of the women walking behind her. There was nothing false or reserved in her manner. You’d swear she was happy to be there. “Isn’t she lovely,” people breathed all around us. “Isn’t she beautiful. Our princess.”

And that quality she had, that I’d felt when we were fifteen, that shone out of every photo—it was there, palpable, right there in our little square, amplified and reflected back to her by the people lining the street.

She drew closer to where Gillian and I waited. I think my heart actually stopped for a few beats. I could have died right there in front of her. She bent down to whisper to a little girl standing to our left, then straightened and moved on past us, pausing again to shake hands with an old codger with his war medals on.

She didn’t look at me.

Behind me, Gillian squeezed my shoulder. I twisted my neck to look up at her, grateful for my sunglasses. Gillian understood. I could see it in her face. She couldn’t know about my meeting with Diana, because I’d never told anyone. But she understood anyway. I managed a weak smile and turned back. Diana was still just a few feet beyond us, smiling, greeting, embracing all of us in her kind blue gaze.

Close behind her and the mayoral party was her military escort, six handsome young soldiers, sauntering casually. One of them caught my attention. Loathing flooded me even before I actually recognized him. And then I realized that others were recognizing him too—the Westerford boy home in triumph. “Adam!” they shouted. “Lieutenant Widmer!” He grinned, enjoying the glory.

Hearing the shouts, Diana turned back toward him and paused so he could catch up with her. She put her hand on his arm and said something, laughing. Tall as she was, he was taller. He leant down to her, nodding with a charming smile. She continued the walkabout. Adam fell back into line with the other soldiers.

She had distracted him at the right moment so he didn’t see me, thank goodness. I don’t know if I could have endured meeting his eyes and seeing either his recognition of me, or the lack of it. I would have needed to kill him.