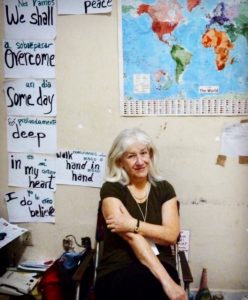 Jo Salas is the cofounder, with Jonathan Fox, of Playback Theatre, story-based improvisational theatre that builds connection, dialogue, and change. Volunteers from the audience tell personal stories during a performance, then watch as trained actors and musicians create theatre on the spot. Playback Theatre takes place in theatres, schools, migrant labor camps, conferences, and more, in about 60 countries.

An accredited trainer of Playback Theatre, Jo has led Playback Theatre training workshops in 27 countries, both as an independent trainer and through the Centre for Playback Theatre. She teaches all aspects and levels of the work, from introductory to advanced. Her teaching specialties include conducting, music, and trainer training. Jo is also available to coach via Skype.

To discuss a workshop or coaching please contact Jo at josalas5566@gmail.com.

Jo is the founder, former artistic director, and current coordinator of Hudson River Playback Theatre  (HRPT), based in the Mid Hudson Valley of New York. HRPT’s major projects have included the 8-year project Immigrant Stories, giving a public voice to immigrants in the Mid Hudson region. No More Bullying! which addresses school bullying by empowering witnesses to take action, has been active since 1999, now joined by a new variation  Strong Together.  Jo and other HRPT members have trained seven other Playback Theatre companies in this original approach. Training is available either in person or online. Since 2008 HRPT has also built a strong focus on climate change and has participated in  Climate Change Theatre Action since its inception.

Jo’s publications about Playback Theatre include Improvising Real Life: Personal Story in Playback Theatre, now published in ten languages. IRL is now available in a 20th anniversary edition and as an e-book. Her TEDx talk “Everyone has a story” is available on YouTube.

A writer of fiction as well as nonfiction, Jo has published short stories and a novel, Dancing with Diana.