Alzie’s: Love and sorrow in a lifelong friendship,2022

An Invisible Woman: The case of the missing translator, 2022

The Famous Murderer: An encounter with AIDS, 2022 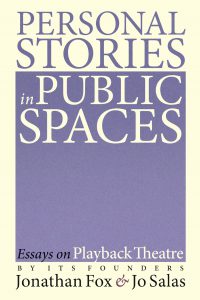 Personal Stories in Public Spaces: Essays on Playback Theatre by Its Founders. By Jonathan Fox and Jo Salas. Tusitala Publishing, 2021

Stories by Firelight. Playback Theatre in the Jordan Valley, 2013.

“Stories in the Moment: Playback Theatre for Building Community and Justice.” In Acting Together: Performance and the Creative Transformation of Conflict, Vol 2, Eds Varea, Cohen, and Walker. New Village Press, 2011.

“Immigrant Stories in the Hudson Valley.” In Telling Stories to Change the World, Eds Solinger, Fox, and Irani. Routledge, 2008. 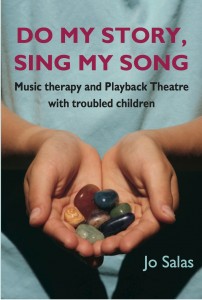 Do My Story, Sing My Song: Music Therapy and Playback Theatre with Troubled Children. Tusitala Publishing, 2007.

“A Brightening in the Fall.” The Guardian Weekly, November 1997. 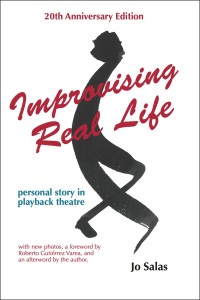 “Music in Playback Theatre.” The Arts in Psy­chothera­py, Winter 1992.