The link is story

There is a link, of course, between my fiction-writing life and my Playback Theatre life. The link is story. In Playback performances, workshops, and rehearsals, I listen to stories about real life, all kinds of stories, from all kinds of people. Sometimes the teller tells something that immediately sounds like a story: it begins with a “once upon a time,” a “platform,” in Keith Johnstone’s terms, and goes on to some kind of turning–a surprise, a disaster, a revelation. And eventually there is a resolution, or at least a considered place to stop.

Often the teller’s story does not yet have this arc. It may be implicit, and will take form with a judicious question or two. 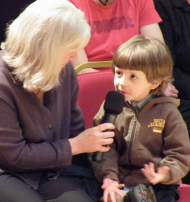 Or it may be more like a cluster of thoughts, feelings, observations. But there is always something emerging, something that propels these words to be spoken, in this place and time, in front of these particular people. The teller talks and the story comes into the light, sometimes changing direction or crystallizing as the conversation unfolds. As the “conductor,” I sit beside the teller and listen, occasionally asking a question to clarify a detail or to reflect what seems to be the path of the story. There comes a moment when what needs to be told has been told, and now it is up to the actors and musician to transform it into embodied theatre, reflecting the story’s meanings to the teller and to the audience. So that everyone understands. So that the story situates itself in our minds, hearts, and bodies.

This kind of storytelling is, integrally, a collaboration between the person who lived this experience, the performing team, and the audience. We are all necessary to the outcome. The story, as it moves from spoken dialogue into theatre with movement and interaction, and then into collective memory, belongs to all of us.

When I write fiction I am alone with my laptop. I have no collaborator. The story may grow from something that a real person said or did, something that I witnessed. But quickly it slips into a different realm. The story is not a factual record. I do not portray real people but people who have acquired faces, voices, histories, and yearnings in the realm of my imagination.

As with the Playback scenes, a story emerges, with shape, themes, a set of meanings that interweave and refract each other.

Many of the stories I hear in performances are rich enough to work on the page. But I don’t parlay Playback stories into fiction. They are not mine to write. My relationship to them is midwife, not author. I do not want to exploit this bond of trust.

But my two story worlds are not entirely separate. Playback teaches me what a story is. It teaches me how to construct something with aesthetic form out of the raw material of a life event, or an arresting perception. Writing stories sharpens my discernment of the layers of these unrehearsed but resonant narratives offered by audience members. It tunes my ears to beauty and meaning.